Due to the recent revelations of a mass exodus of illegal immigrants from the USA due to new Immigration laws in the US ( are mostly Muslims from the middle east and Africa) and the fact they can just walk across the border in many places has prompted me to share my longtime dream of a great Canadian border fence, we do not need a Trump or Israeli cement wall with automated gun turrets but we do need a fence to protect the worlds longest open unprotected border.

Why do we need such a fence? Well its obvious and logical to any sentient Canadian that we need a border fence spanning our long open border with the USA to stop smuggling of illegal hard drugs like heroine and crystal meth slowly killing our people, human trafficking,to stop smuggling of illegal hand guns and automatic weapons and to stop illegal immigrants from flooding our borders.

How can we do this and afford to do it?  Its very simple. A 20 ft high chain link fence stretching across our border (that would not impede the view and serenity of our beautiful landscape without intrusion) with a 3 to 4 ft cement base to keep below the frost line to preserve the life of the fence and to deter tunneling as happens at the US/Mexico border with fence sensors to detect fence cutting, seismic detectors to detect tunneling activities, surveillance cameras along the fence and drones to patrol over the border to lower costs and shortage of Canadian Border Services Agents and maintain realistic logistical monitoring of our border without great cost and manpower. Perhaps the US can kick in a few dollars since this would stop and deter the entry of radical Islamists into the USA from Canada. We waste 20 billion dollars on rapefugees, immigrants and 50 billion in unpaid taxes by Chinese immigrants so yeah we can afford the fence and savings in the long run in law enforcement, prisons (Joyceville Penitentiary know as the Muslim prison and mostly sex offenders and so called honour killing murderers), free money and grants to so called refugees and illegal immigrants, murders due to illegal guns smuggle from the USA, drug smuggling and human trafficking costs to law enforcement and the justice system at large.

This is a logical and practical next step in securing the safety and security in Canada.

22 refugees entered Manitoba near Emerson border over the weekend

Number of asylum seekers walking from U.S. to the province continues to grow

The temperature dipped below –20 C as a large group of refugees trudged through snowy Manitoba fields near the U.S. border Saturday.
Farhan Ahmed says he couldn't feel his fingers or toes as he walked about 12 kilometres along a road.
"It was very, very cold and it was icy that night," Ahmed said.
Over the weekend, RCMP said, 22 people crossed the border near Emerson, about 100 kilometres south of Winnipeg — 19 on Saturday and three on Sunday.
Ahmed and his group, including a family with children, finally called 911 for help. RCMP brought them to a Canada Border Services Agency location where they could make refugee claims.
"They gave us heat. If we didn't get that, I couldn't feel my hands. I couldn't feel my hands. It was hard," Ahmed said.
The number of asylum seekers crossing the Canada-U.S. border into Manitoba on foot instead of through official crossings has drastically increased in the last few months, said Rita Chahal, executive director of Manitoba Interfaith Immigration Council.
"In January alone there were about 39, 40 files opened," she said.
Ten files were opened last week and, with the recent group over the weekend, Chahal said there will be at least 20 more this week.
Since April 2016, the council has opened 270 files, with a large increase in the fall.

Ahmed grew up in a small town in Somalia where his father was a local chief. In June 2014, Ahmed said, his father was murdered, and since he was the oldest son, his life was also threatened.
"I … received calls that I would be next and I would be killed," he said.
As a father of three and the breadwinner for his family, Ahmed had a tough choice. But in the end he decided to flee in order to find safety and freedom for his family elsewhere.
The last time he saw his wife was on June 23, 2014, three days after his father's death. His journey then led him to Brazil, Venezuela, Colombia, Panama, Costa Rica, Nicaragua, Honduras, Guatemala and Mexico before he finally landed in the United States in October 2014. 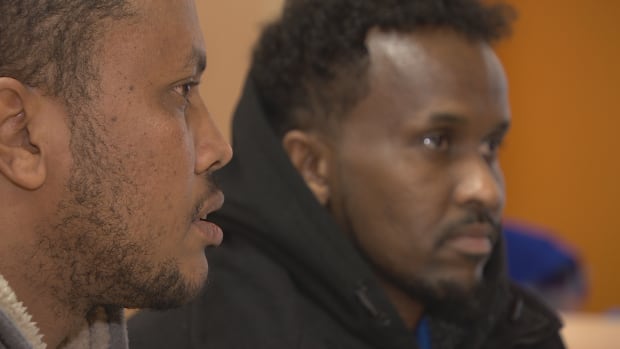 (Left) Farhan Ahmed and another refugee say they couldn't feel their fingers or their toes during their journey across the border on Saturday. (Tyson Koschik/CBC)
Ahmed said he was initially detained in Texas before being transferred to the Buffalo Federal Detention Facility.
He was kept in the facility, trying to make an asylum claim, until February 2015, when his application was denied and he was told he would be deported.
However, Ahmed said there was a mix-up in paperwork, and he was released under supervision and moved in with family in Ohio.
"They gave me work authorization and then I became a truck driver. I used to drive. I became a taxpayer," he said.
"I was supporting my family in Somalia, my wife and my kids."
Finally, life seemed to be going Ahmed's way — but it wouldn't last. Immigration officers showed up looking for Ahmed in Ohio last year while he was out driving.
Ahmed thought about trying his luck again with an asylum claim, but when U.S. President Donald Trump signed the executive order barring citizens from seven Muslim-majority countries, including Somalia, from entering the U.S. he figured there was no hope.
"That's not human rights. That was not what I was wishing when I was in Somalia, when I was coming," he said.
Trump's order has prompted many people in Canada — advocates, students, professors, politicians — to urge the federal government to scrap or at least suspend its Safe Third Country Agreement with the United States.
Under the agreement, which came into effect in 2004, individuals seeking protection must make a claim in the first country they arrive in — either Canada or the U.S.
That requires Canada to send back to the U.S. any claimants entering Canada via its land border with the U.S., based on the premise that the U.S. is a safe country where they can make asylum claims.
Those calling for the pact to be scrapped say the U.S. is no longer a safe place for those seeking asylum. As such, asylum seekers should not be turned away from Canada's borders and sent back to the U.S.

Posted by Canadian Nationalist Front at 4:54 PM No comments:

Watch this! Trudeau should be charged with high treason for aiding and abetting radical Islamist terrorists.

Watch this! Trudeau should be charged with high treason for aiding and abetting radical Islamist terrorists.

Section 46 (1) (c) states that a person is guilty of high treason if he or she, "assists an enemy at war with Canada, or any armed forces against whom Canadian Forces are engaged in hostilities, whether or not a state of war exists between Canada and the country whose forces they are." One could certainly argue that he has done this by bringing people to Canada whose stated goal is to take over. Is he ignorant or complicit?
So now, in addition to Trudeau being guilty of supporting genocide by ignoring Christian Syrians in favour of Islamic Syrians as migrants brought to Canada, he is guilty of treason.

Posted by Canadian Nationalist Front at 4:23 PM No comments:


YOUR URGENT HELP IS NEEDED! Motion M-103 is currently being considered by Parliament and is scheduled for a vote on Thursday, February 16th.
The motion will encourage legislation that would criminalize speech deemed "islamophobic" and lay the groundwork for imposing what is essentially a Sharia anti-blasphemy law on all of Canada.
If that happens, criticism of Islam would constitute a speech crime in Canada.
This motion uses the term "islamophobia" without defining it, and without substantiating that there is in fact any such widespread problem in Canada.
This will lead to ideologically-driven overreach and enforcement against alternative points of view—including mature, reasoned criticisms of Islam.
If this motion passes and legislation is enacted:
That kind of content-based, viewpoint-discriminatory censorship is unacceptable in a Western liberal democracy.
Furthermore, Motion M-103 addresses a particular religion to the government's special consideration, while ignoring hostility toward other religions, such as Christianity or Judaism.
Although the Motion is titled “Systemic racism and religious discrimination,” it never once mentions anti-semitism, or discrimination against Christians and other religious groups. That's ironic, since data shows that the majority of Canada's hate crimes are anti-semitic, not anti-Islamic!
Passing this resolution would demonstrate a clear and impermissible governmental preference for Islam over other faiths.
So far, all parties have indicated unanimous support for the bill. We face an uphill battle, but it's imperative that our government understands that we oppose this motion.
Sign the petition immediately to send a message to MPs and party leaders, asking them to drop support for M-103!
--
Further information:

CitizenGO will protect your privacy and will keep you informed on this and other campaigns.
M-103 is an affront to free speech

To Members of Parliament Iqra Khalid, Ron McKinnon, and Raj Grewal,
(cc: The Honourable Conservative Party Leader Rona Ambrose and New Democratic Party Leader Tom Mulcair)
I am writing you to express my deep misgivings and opposition to Motion M-103, titled "Systemic racism and religious discrimination."
This motion will encourage legislation that would criminalize speech deemed "islamophobic" and lay the groundwork for imposing what is essentially a Sharia anti-blasphemy law on all of Canada.
This motion uses the term "islamophobia" without defining it, and without substantiating that there is in fact any such widespread problem in Canada.
This will lead to ideologically-driven overreach and enforcement against alternative points of view—including mature, reasoned criticisms of Islam.
That kind of content-based, viewpoint-discriminatory censorship is unacceptable in a Western liberal democracy.
Furthermore, Motion M-103 addresses a particular religion to the government's special consideration, while ignoring hostility toward other faiths, such as Christianity or Judaism.
Passing this resolution would demonstrate a clear and impermissible governmental preference for Islam over other faiths.
For all these reasons, I strongly urge that you retract and oppose Motion M-103.

Sincerely,
[Your Name]
Posted by Canadian Nationalist Front at 2:32 PM No comments: