If you want to call it RaHoWa (Racial Holy War) or Jihad it is happening all over the world and in Canada. We are in the midst of WW III even though smaller in scale has been raging on in the Middle East for over a decade with the invasion of Iraq in the first Gulf War then Afghanistan, Libya to the present western sponsored and inspired overthrow of governments like Egypt, Libya and Syria are the latest in the flames of this Jihad escalating into global terrorism and world war.

With these wars raging on and a Middle East on fire engulfed in war and hatred for the West and White European Infidels due to our meddling and political satire about Muhammad and Islam in our somewhat more free democratic countries it is not only resulting in bloodshed, murder of western soldiers and diplomats, the Jihad in the Mid-East is spilling over into the western world thanks to the open floodgates of our borders allowing the invasion of non-white hostile alien enemy forces of every race to just walk in then give them more rights and privileges than its indigenous established citizens, starting to outnumber us in the urban areas so when there are riots, looting and murders by these hordes the police and military are paralyzed and outnumbered and the government just stands by and allows it to happen because of corrupt Liberal politicians and sinister goals of greedy left wing extremists and profiteers.

Are we to sit idly by to watch this happen and allow the safety and security of our white nations be compromised by a hostile imported population that doesn't want to be here? That disrespects our culture, heritage, institutions and our laws! We try to help them and make their countries safe so they do not come here in droves but yet they still come knowing they can use us and send our money back to insurgents instead of going back home to fight for themselves as they should. Refugees? Refugees in fear of their lives that go back to visit their homelands often? 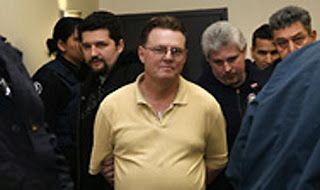 Time to stand up and tell our governments in open protest, letter writing campaigns (but be careful of how you word things you may end up in jail wrongfully like patriot Brad Love) marches and lobbying to stop immigration of non-Europeans into our nations to subvert, pollute and dilute our gene pool. Time to make a stand and save Our Heritage! Our Homeland!

Posted by Canadian Nationalist Front at 7:23 PM No comments: