The past few weeks there have been some frightening revelations in Canada of teenage terrorists from Canada who were involved and killed in the gas plant attack in Algeria, the day after the Boston terror attack by Chechen Islamists in the USA an Islamist terror plot to blow up railway lines in Canada was foiled before anybody was hurt.

The Conservatives i voted for actually ( yes i vote because it give me the right to complain) made some good changes in immigration reform this year but obviously not enough. There should be stipulations in the law in reverse of the 'Safe Countries' section of the new legislation not accept refugee claimants from countries where there is no danger on the flip side there should be a clause not to accept refugee claimants from 'Extremely Dangerous For Us Countries If We Let Them In' clause. Countries that harbour Islamist Extremism for example Afghanistan, Iraq (post War) Egypt, Yemen,Libya and countries that thanks to western interference have become radical Muslim states and known to have training camps and terror cells. Chechnya a Muslim extremist state that has fought 2 wars against ruling Russia for Independence have Jihadists, anyone coming from say Iran Or Syria that are secular countries that detain such extremists and not tolerated are likely Jihadists on the run and want to take revenge on the American infidels and of course Canada being the little brother that gets dragged along in these fights we become a target as well. 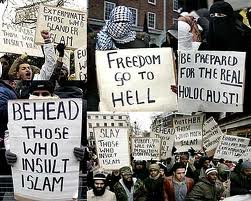 PUT UP A FENCE, CLOSE DOWN THE BORDER! KEEP OUR COUNTRY SAFE!

OUR HERITAGE! OUR HOMELAND!
Posted by Canadian Nationalist Front at 3:36 PM 1 comment: