Nelson Mandela the Terrorist and White Genocide in South Africa

How and why could a convicted terrorist responsible for 560 attacks and murders of innocent women and children in South Africa become a president and get a Nobel Peace Prize? I guess Charles Manson should get a Nobel Prize as well or just put em in cereal boxes so anyone can get one as seems to be the case. Insane you would say and couldn't happen people would say but it did.

Nelson Mandela the communist had planned and carried out bombings in South Africa until he was caught and convicted and put in prison in 1962, why wasn't he executed? Any other nation would have hung such a scumbag but the supposed oppressive Apartheid government allowed him to live. Then 27 years later the then (White) president De Klerk wanted to end apartheid so he chose Mandela as the pawn to settle the local brutal savages for the transition. 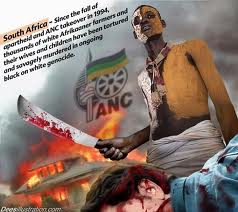 Since 1994 over 4000 white farmer families have been brutally raped, murdered and skinned alive and altogether 70 000 whites murdered by blacks in this Genocide being condoned by then president Mandela and the current ANC government, why doesn't the UN step in? Impose sanctions? Put Mandela on trial for war crimes and crimes against humanity? Is there that much White Guilt that the world ignores this? Under Apartheid there were no such murders, government sanctioned murder or cruelty or inhumane conditions as the Boer Whites have had to suffer, If whites did this to non-whites or even whites doing it to whites the US and her allies would invade and save the population from being annihilated in this type of genocide!

Stop the Genocide in South Africa and take that Peace Prize from Mandela and lat that savage animal die a savage animal and not remembered as some kind of hero but the zero he was! 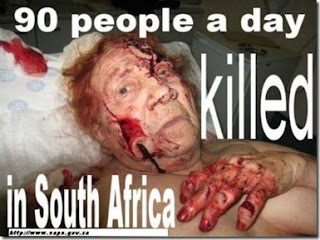 Posted by Canadian Nationalist Front at 6:48 PM No comments: