Hope we at the Canadian Nationalist Front have helped to inspire a new trend of nationalist activism to be publicly active even if small in number as what the Proud Boys did on Canada/Dominion Day.

From the Proud Boys Facebook group: "The Proud Boys are a fraternal organization founded on a system of beliefs and values of minimal government, maximum freedom, anti-political correctness, anti-racial guilt, pro-gun rights, anti-Drug War, closed borders, anti-masturbation, venerating entrepreneurs, venerating housewives, and reinstating a spirit of Western chauvinism during an age of globalism and multiculturalism."

For too long our movement has been held back by the notion that public action small in numbers somehow hinders our cause or diminishes its value but any activism shows the determination and will of our people to make change to our crumbling national identity, heritage and culture. Five of us is equal to 50 sheep or lemmings in determination, ideals and commitment for those of us willing to fight and die defending Canadian values. 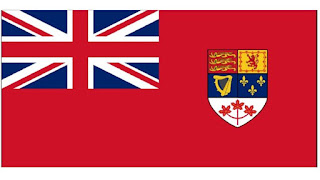 First a word from our friend Paul Fromm on Canada Day aka Dominion Day.


HAPPY DOMINION DAY
1867 -- In 1867, four British colonies joined to form the Dominion of Canada: Canada East (Quebec); Canada West (Ontario); New Brunswick, and Nova Scotia However, lands to the west and northwest of Ontario, called Rupert's Land, which were under the rule of the Hudson's Bay Company, were not part of the new country. Canadian Prime Minister Sir John A. MacDonald was determined to extend the ownership, control, and authority of the new Government of Canada over the western territories. This is a very early Canadian flag from around 1870, which has crests from four original provinces of 1867, and the new addition of Manitoba's leaping buffalo in 1870.
1917 -- April 9 1917. The significance of Vimy Ridge was that, for the first time, Canadian divisions fought as a unified Canadian force – not as auxiliaries to British forces. The cost was enormous – at the end of the day, 10,000 Canadians lay dead or wounded – but we had taken an enemy position that had been considered impregnable. The effect was to galvanize a sense of confidence and optimism.
1967 -- Alexander Calder’s time capsule, Expo ‘67. Mementos from that optimistic time are buried at the foot of Alexander Calder’s time capsule sculpture piece. The capsule is meant to be opened May 17 2067. What will Canada look like then? Will a middle class still exist? Will Canadians still expect to own their own homes? Will Canada be a country of 100,000,000 as some have prescribed? Will the descendants of the Fathers of Confederation, warriors of Vimy and swinging Baby Boomers still be in evidence? Will their optimism? Or will our European founder/settler people have been replaced by a foreign majority?
2017 -- A duck to symbolize our 150 anniversary? The brain child of our corrupt, anti-European, anti-Christian, pro "diversity" elites. It is a symbol of an increasingly infantile, weak, lost country.
A few brave patriots and I did a similar thing in March to celebrate international European Heritage/White pride Day. The lads and I had a plan but it changed and was spur of the moment after we saw Islamists on the corner at Peterborough Square trying to indoctrinate locals to convert to Islam so we decided to have our rally beside them but alas they vanished. We made a stand against public Islamist indoctrination of the public, stood for European Pride and Christian pride for those members or supporters of the CNF that embrace Christianity.

Our kindred Proud Boys did as we did, stood up to celebrate Canada/Dominion Day in the face of those insulting Canada and spitting in the face of our heritage on a holy and proud day for us. Many native aboriginals support us in our efforts to end third world immigration and the islamification of Canada and preserving our common heritage in Canada's history, Leftists as usual using minorities as pawns and slaves to further their multi-cult agenda and create friction amongst whites and natives and other groups attempting to hijack our celebration to propagate fictional ongoing genocide and oppression that does not exist.

As we did the Proud Boys waved Canada's original red ensign Dominion flag and sang "God Save The Queen" whilst some pretty white looking supposed natives had a provocative ceremony to incite hatred against Canada. The real natives I know would not support such an action as we do not go on to reserves to disgrace their celebrations. I have been on many reserves across Canada, been welcomed and made political alliances with native aboriginals "real ones" on the topic of third world immigration, not saying were holding hands and singing "give peace a chance" but having a pint and agreeing to preserve both our cultures, heritage and country to our mutual benefit.