A Lover Among Us 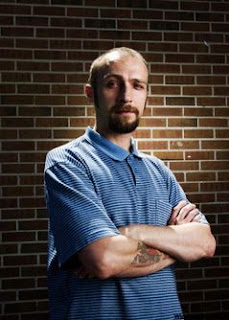 A Lover Among Us
In an attempt to demonize White Nationalists they titled the National Post article interview with me "A  Hater Among Us" when in fact we are about love, we fight for the love of our land, race and women and children, we are proud and want to stick to our own kind, not out of hatred but pride, preservation of our culture. Here is my narrative of the interview.
“I feel that Canada’s makeup should be predominantly white European,” Kevin Goudreau, leader of Canada's White Nationalist Front, says, adding that would be accomplished through “basically the repatriation of Third World immigrants back to their country of origin.”


Stewart Bell  Aug 6, 2011 – 9:30 AM ET | Last Updated: Aug 5, 2011 10:07 PM ET
Kevin Goudreau’s blue golf shirt is buttoned to the collar. Were it not, heads would surely be turning, because there is a large tattoo of a swastika on his chest.
He keeps it under wraps during a recent interview, but it is on the Internet for all to see, along with photos of him blanketed in a Nazi flag and with his arm raised in the Nazi salute.
The Oshawa, Ont., drywaller is the leader of the White Nationalist Front, which wants to turn Canada into a white homeland by deporting millions of Canadians of other skin colours.
While Mr. Goudreau does not consider the Norwegian far-right terrorist Anders Behring Breivik an ideological peer, the similarities in their online writings are hard to ignore.
Both demonize multiculturalism, immigration, hate-crimes laws, the media and the left. Both see the solution as social engineering that they imagine will return them to a condition of national homogeneity that never truly existed in the first place.
Where they diverge is on the subject of exactly who poses the primary threat to their Utopias: while Breivik sees Muslim immigrants as the problem, Mr. Goudreau wants all non-whites expelled.
“I feel that Canada’s makeup should be predominantly white European,” ( They forgot to add that i said "besides Native/Aboriginals) he said, adding that would be accomplished through “basically the repatriation of Third World immigrants back to their country of origin.”